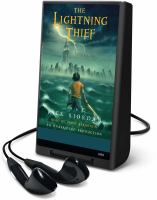 View all formats and editions (15)

Percy Jackson and the Lightning Thief
by Riordan, Rick; Bernstein, Jesse (Read by)
Rate this title:
vote data
Click an element below to view details:

Percy Jackson and the Lightning Thief

Gr 5-9-At the outset of this fast-paced tale by Rick Riordan (Hyperion/Miramax, 2005), it would seem that Percy Jackson is just another New York kid diagnosed with ADHD, who has good intentions, a nasty stepfather, and a long line of schools that have rejected him. The revelation of his status as half-blood offspring of one of the Greek gods is nicely packaged, and it's easy to believe that Mount Olympus, in modern times, has migrated to the 600th floor of the Empire State Building (the center of Western civilization) while the door to Hades can be found at DOA Recording Studio, somewhere in LA. With his new friends, a disguised satyr, and the half-blood daughter of Athena, Percy sets out across the country to rectify a feud between Zeus, Hades, and Poseidon. Along the way they must cope with the Furies, Medusa, motorcycle thug Aires, and various other immortals. Although some of Jesse Bernstein's accents fail (the monster from Georgia, for instance, has no Southern trace in her voice), he does a fine job of keeping the main characters' tones and accents distinguishable. He convincingly portrays Percy, voicing just the right amount of prepubescent confusion, ironic wit, and the ebbing and waning of concern for himself and those around him. Mythology fans will love this take and kids who haven't been inculcated with the Classical canon will learn aspects of it here while having no trouble following a rollicking good-and modern-adventure.-Francisca Goldsmith, Berkeley Public Library, CA (c) Copyright 2010. Library Journals LLC, a wholly owned subsidiary of Media Source, Inc. No redistribution permitted.

Percy Jackson and the Lightning Thief
by Riordan, Rick; Bernstein, Jesse (Read by)
Rate this title:
vote data
Click an element below to view details:

Percy Jackson and the Lightning Thief

For this fast-paced adventure that zaps characters from Greek mythology into modern times, Bernstein gets the reading rhythm just right. He conveys Riordan's notes of humor, sarcasm and downright amazement in the voice of 12-year-old Percy Jackson, a smart kid who seems to be a magnet for trouble. But one day Percy discovers that being kicked out of a different school every year and dealing with learning challenges like ADHD is nothing compared to the truth of his life: he's a demigod, the son of Poseidon. Of course, among other things, that means an action-packed mission to the Underworld to find Zeus's stolen lightning bolt and return it to Mount Olympus (specially accessed as the 600th floor in the Empire State Building). Listeners will be hanging on every zippy chapter here and will be eager to find out where Percy heads next in this planned series. Ages 10-up. (July) (c) Copyright PWxyz, LLC. All rights reserved