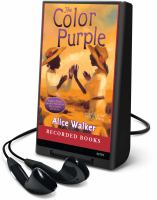 View all formats and editions (20)

The Color Purple
by Walker, Alice (Author, Narrated by)
Rate this title:
vote data
Click an element below to view details:

Alice Walker won the Pulitzer Prize and the American Book Award for her novel The Color Purple. Her other bestselling novels include By the Light of My Father's Smile, Possessing the Secret of Joy, and The Temple of My Familiar. She is also the author of two collections of short stories, three collections of essays, five volumes of poetry, and several children's books. Her books have been translated into more than two dozen languages. Born in Eaton, Georgia, Walker now lives in Northern California. Like so many characters in her fiction, Alice Walker was born into a family of sharecroppers in Eaton, Georgia. She began Spelman College on a scholarship and graduated from Sarah Lawrence College in 1965. While still in college, Walker became active in the civil rights movement and continued her involvement after she graduated, serving as a voter registration worker in Georgia. She also worked in a Head Start program in Mississippi and was on the staff of the New York City welfare department. She has lectured and taught at several colleges and universities and currently operates a publishing house, Wild Trees Press, of which she is a co-founder. Walker began her literary career as a poet, publishing Once: Poems in 1968. The collection reflects her experiences in the civil rights movement and her travels in Africa. Her second collection of poetry, Revolutionary Petunias and Other Poems (1973), is a celebration of the struggle against oppression and racism. In between these two collections, she published her first novel, The Third Life of Grange Copeland (1970), the story of Ruth Copeland, a young black girl, and her grandfather, Grange, who brutalizes his own family out of the frustrations of racial prejudice and his own sense of inadequacy. Walker's first collection of short stories, In Love and Trouble: Stories of Black Women (1973), established her special concern for the struggles, hardships, loyalties, and triumphs of black women, a powerful force in the rest of her fiction. Meridian (1976), her second novel, is the story of Meridian Hill, a civil rights worker. In her second collection of short stories, You Can't Keep A Good Woman Down (1981), Walker again portrays black women struggling against sexual, racial, and economic oppression. Walker's third novel, The Color Purple (1982), brought her the national recognition denied her earlier works. Through this story of the sharecropper Celie and the abuses she endures, Walker draws together the themes that have run through her earlier work into a concentrated and powerful attack on racism and sexism, and produces a triumphant celebration of the spirit and endurance of black women. The book received the Pulitzer Prize and was made into a successful film. Walker describes her most recent novel, The Temple of My Familiar (1989) as "a romance of the last 500,000 years." The book is a blend of myth and history revolving around three marriages. As the married couples tell their stories, they explore both their origins and the inner life of modern African Americans. (Bowker Author Biography)