Cinderella : or, The little glass slipper / a free translation from the french of Charles Perrault ; with pictures by Marcia Brown. 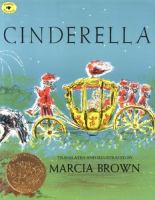 View all formats and editions (13)

Charles Perrault was born in Paris on January 12, 1628. He was the son of an upper-class burgeois family and attended the best schools, becoming a lawyer in 1651. After being a lawyer for some time, he was appointed chief clerk in the king's building, superintendent's office in 1664. While there, he induced Colbert to establish a fund called Liste des Bienfaits du Roi, to give pensions to writers and savants not only in France but in Europe. He took part in the creation of the Academy of Sciences as well as the restoration of the Academy of Painting. When the Academy of Inscriptions and Belles-Lettres was founded by Colbert in 1663, Perrault was made secretary for life. Having written but a few popular poems, he was elected to the French Academy in 1671, and on the day of his inauguration he invited the public to be admitted to the meeting, a privilege that has ever since been continued. Perrault laid the foundations for a new literary genre, the fairy tale, with his works derived from pre-existing folk tales. The best known of his tales include Le Petit Chaperon rouge (Little Red Riding Hood), Cendrillon (Cinderella), Le Chat BottÃ© (Puss in Boots), La Belle au bois dormant (The Sleeping Beauty) and La Barbe bleue (Bluebeard). His stories continue to be printed and have been adapted to opera, ballet (for example, Tchaikovsky's Sleeping Beauty), theatre, and film. He also wrote ParallÃ¨les des Anciens et des Modernes (the Parallels between the Ancients and the Moderns), from 1688 to 1697, which compared the authors of antiquity unfavorably to more modern writers, and caused a debate that lasted for years. Charles Perrault died on May 16, 1703. (Bowker Author Biography)