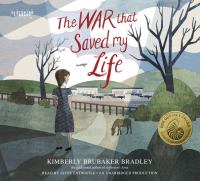 To see other titles in our catalog that have won the Intermediate Nutmeg Award, click here.

View all formats and editions (5)

Rate this title:
vote data
Click an element below to view details:

Gr 4-6-Since she was born with a twisted foot, 10-year-old Ada has never been allowed to leave the one-room London apartment she shares with her mother and younger brother, Jamie. Mam is mortified by Ada's foot, and she physically and emotionally abuses Ada, withholding food, locking her in a cupboard, and forcing Ada to crawl on the floor instead of supplying her with crutches. But when Ada learns Jamie will be shipped out of London in case the city is bombed by the Germans, Ada sneaks away with him, freeing herself from her mother's cruelty and discovering a world she never before imagined for herself. The two children are sent to live in the country with Susan Smith, a woman who is still reeling from the death of her close friend, and who initially isn't keen on taking them in. As the story progresses, however, Ada and Jamie slowly begin to trust Susan, and Susan opens her heart to them. Thanks to narrator Jane Entwistle's distinct voicing, each character's personality shines through. VERDICT Highly recommended, particularly for those studying the Second World War.-Anne Bozievich, Friendship Elementary School, Glen Rock, PA Â© Copyright 2014. Library Journals LLC, a wholly owned subsidiary of Media Source, Inc. No redistribution permitted.