The opposite of everyone / Joshilyn Jackson. 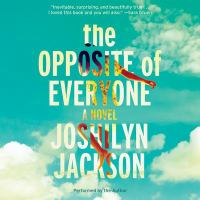 View all formats and editions (2)

The Opposite of Everyone
by Jackson, Joshilyn (Author, Read by)
Rate this title:
vote data
Click an element below to view details:

The Opposite of Everyone

Joshilyn Jackson graduated with honors from Georgia State with a degree in English literature. After earning her Master's in English at the University of Illinois in Chicago, she taught university-level English. Jackson's short fiction has been published in many literary magazines and anthologies, and plays that she has written have been produced in Chicago and Atlanta. Gods in Alabama, Jackson's first book, won SIBA's Novel of the Year award in 2005 and was a #1 BookSense pick. Between, Georgia was also a #1 BookSense pick, which gave Jackson the distinction of being the first author to receive that status in two consecutive years. Jackson also won the Listen Up award from Publisher's Weekly for her audio book reading. Her newest book is entitled, Backseat Saints. (Bowker Author Biography)