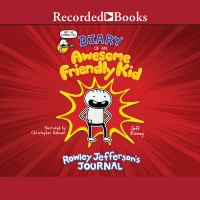 Jeff Kinney was born in College Park, Maryland on February 19, 1971. He received a degree in computer science from the University of Maryland and created a comic strip Igdoof, which ran in the campus newspaper. Before becoming an author, worked as a computer programmer, online game developer, and designer. He is the author and illustrator of the children's series Diary of a Wimpy Kid. He originally developed the Diary of a Wimpy Kid series online in installments on Funbrain.com. In 2006, he signed a publishing deal to turn his work into a print series. (Bowker Author Biography)