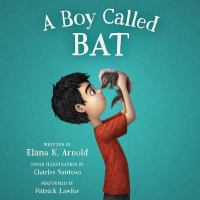 To see other titles in our catalog that have won the Elementary Nutmeg Award, click here.

This charming tale of newfound friendship in a pint-size package introduces third-grader Bixby Alexander Tam. Bat, nicknamed for his sensitivity to sound, sometimes fluttery hands, and, of course, initials, covets two things above all else: order (crustless sandwiches, freshly stocked vanilla yogurts, expertly organized dresser drawers) and animals. So when Bat's veterinarian mom returns home with an orphaned skunk kit, it becomes Bat's mission to not only meticulously care for it but also keep it for good. With a rescue center willing to rehabilitate the skunk in four weeks' time, Bat must hustle to prove himself a worthy caretaker. Brimming with quietly tender moments (Bat braiding his sister's hair or examining the kit's black eyes), subtle humor, and authentically rendered family dynamics, Arnold's story, the first in a new series, offers a nonprescriptive and deeply heartfelt glimpse into the life of a boy on the autism spectrum. Youngsters will empathize with Bat's adventures and revel in the endearing illustrations that accompany them. As Bat would say, this one's all the way great. Final art not seen.--Shemroske, Briana Copyright 2017 Booklist

Gr 3-6-Bixby Alexander Tam, or Bat, has autism. He has a high need for structure; anything out of the ordinary causes him anxiety. When his mother, a vet, is late coming home from work one day, Bat is panicked. His mother explains she has a good reason, and tells him about the baby skunk she has brought home. The mother skunk did not survive a car accident, but Bat's mom was able to save the kit, and they will raise him at home for a month until he is old enough to be released to a wild animal shelter. Bat, who wants to be a vet himself someday, is fascinated by the kit, named Thor by his sister. Feeling that no one will be able to care for Thor as well as he can, Bat tries to find a way to convince his mother to keep the kit as a pet. This tender novel starts out slowly, focusing on Bat's frequent frustration. Arnold shows more than tells, crafting a nuanced character. Readers learn that Bat goes to a school that values his uniqueness and works with him on interpersonal dynamics like developing an awareness of other people's feelings, empathy, and friendship. Midway through the book, the pacing picks up. Bat's relationships with his teacher and a vet at his mother's clinic are particularly enjoyable and add humor to the novel. Santoso's illustrations, appearing about once a chapter, add warmth. Short chapters and a straightforward plot make this a good candidate for reluctant readers. VERDICT The challenges faced by kids like Bat are often underrepresented in children's literature; this is a refreshing depiction. Readers will appreciate this funny and thoughtful novel.-Juliet Morefield, Multnomah County Library, OR Â© Copyright 2016. Library Journals LLC, a wholly owned subsidiary of Media Source, Inc. No redistribution permitted.

When Bat's veterinarian mother brings home an infant skunk to foster for a month, Bat-a third grader on the autism spectrum-hopes to prove that he's responsible enough to keep the skunk, Thor, as a pet. Written in third person, this engaging and insightful story makes readers intimately aware of what Bat is thinking and how he perceives the events and people in his life. With empathy and humor, Arnold (Far from Fair) delves into Bat's relationships with his divorced parents, older sister, teachers, and classmates. In one tender scene, Bat braids his sister's hair: "Getting along with people was hard for Bat. Figuring out what they meant when they said something, or when they made certain faces at him... People were complicated. But braiding was easy." Bat's supportive family and school encourage his strategies for navigating a confusing world, and Santoso's b&w spot illustrations quietly speak to his isolation, as well as the way he takes to Thor. A budding friendship and open-ended questions about Thor's future will spark anticipation for the next book in this planned series. Ages 6-10. Author's agent: Rubin Pfeffer, Rubin Pfeffer Content. Illustrator's agency: Shannon Associates. (Mar.) Â© Copyright PWxyz, LLC. All rights reserved.