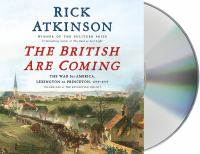 View all formats and editions (3)

The British Are Coming : The War for America, Lexington to Princeton, 1775-1777
by Atkinson, Rick (Author, Read by); Newbern, George (Read by)
Rate this title:
vote data
Click an element below to view details:

Pulitzer Prize winner Atkinson (The Liberation Trilogy) replicates his previous books' success in this captivatingly granular look at the American Revolution from the increasing tension in the colonies in 1773 to the battles of Trenton and Princeton in 1777. Extensive research (including delving into the unpublished papers of King George III, only recently made available to scholars) allows Atkinson to recreate the past like few other popular historians. The result is a definitive survey of the first stage of the war, which would ultimately yield "two tectonic results": the reduction of the British Empire by one-third, and the creation of the United States. By providing vivid portraits of even minor characters, Atkinson enables readers to feel the loss of individual lives on both sides of the conflict, and by providing memorable details-such as starving soldiers relishing a stew made out of a squirrel's head and some candlewicks-he brings new life even to chapters of oft-told American history. Atkinson doesn't shy away from noting the hypocrisy of the slave-owning founding fathers, and his mordant prose (the author of a letter advocating a belligerent attitude towards the colonials is described as having "the cocksure clarity of a man who slept in his own bed every night three thousand miles from trouble") is another plus. This is a superlative treatment of the period. (May) Â© Copyright PWxyz, LLC. All rights reserved.

The British Are Coming : The War for America, Lexington to Princeton, 1775-1777
by Atkinson, Rick (Author, Read by); Newbern, George (Read by)
Rate this title:
vote data
Click an element below to view details:

This balanced, elegantly written, and massively researched volume is the first in a projected trilogy about the Revolutionary War, which follows Atkinson's Liberation trilogy about WWII, the premier volume of which (An Army at Dawn, 2002) won a Pulitzer Prize in History. Combining apt quotation (largely from correspondence) with flowing and precise original language, Atkinson describes military encounters that, though often unbearably grim, are evoked in vivid and image-laden terms. Beginning with Concord and Bunker Hill, and including the subsequent British victory at the Battle of Brooklyn Heights and occupation of Manhattan, he covers the beginning of the war, through the startling American victories at Trenton and Princeton. Besides military operations per se, Atkinson comprehensively covers related phenomena such as recruitment (and desertion), transit (and logistics), provisioning (food and ammunition), imprisonment and recreation, and physical conditions, including weather and prevalent diseases such as smallpox. His profiles of American and English (and allied Hessian) statesmen and soldiers are fair and sharply etched. His treatment of the elderly Benjamin Franklin, especially his diplomacy in Paris, is masterful and funny. Benedict Arnold, at this point in the narrative, emerges strongly as a brilliant officer and an American hero. The portrait of the omnipresent George Washington foreshadows his skills and later great accomplishments. Aided by fine and numerous maps, this is superb military and diplomatic history and represents storytelling on a grand scale.--Mark Levine Copyright 2019 Booklist