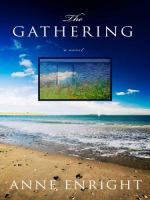 To see other titles in our catalog that have won the Man Booker Prize, click here.

View all formats and editions (6)

The Gathering
by Enright, Anne
Rate this title:
vote data
Click an element below to view details:

Anne Teresa Enright (born 11 October 1962) is an Irish author. She received an English and philosophy degree from Trinity College, Dublin. Enright is a Fellow of the Royal Society of Literature; her novel The Gathering won the 2007 Man Booker Prize. She has also won the 1991 Rooney Prize for Irish Literature, the 2001 Encore Award and the 2008 Irish Novel of the Year. Enright's writings have appeared in several magazines, including The New Yorker, The Paris Review, Granta, the London Review of Books, The Dublin Review and the Irish Times. In 2015 she made the New Zealand Best Seller List with her title The Green Road. This title also made the Costa Book Award 2015 shortlist in the UK. It also won the Irish Book Award for Novel of the Year. (Bowker Author Biography)